In May 2022, the BBK subsidiary Oppo presented the trio of the Reno8 Series in its home country of China. Now the Oppo Reno8 Pro seems to be the first to do the global launch. But instead of a Snapdragon 7 Gen 1 processor, the MediaTek Dimensity 8100 MAX from the Pro+ model should be installed. However, the evidence for this rather unusual approach is quite thin. In May of this year, the Oppo Reno 8 Series consisting of a basic model, the Oppo Reno8 Pro and the 8 Pro+, was presented in China. Don’t be confused by the Reno8 Lite released in this country. Because the Lite model has absolutely nothing to do with the series released in China, but is just a rebranded Oppo Reno7 Lite. In order to quickly distinguish between the three devices, the processors installed in China are mentioned, which will probably differ in this country.

The Reno8 base model gets the brand new 3 GHz MediaTek Dimensity 1300 (04/2022), the Pro model the even newer Snapdragon 7 Gen 1 and the premium version with the Oppo Reno8 Pro+ is allowed to use the MediaTek Dimensity 8100 MAX octa-core processor put up with. But the top model of all things should not appear globally at all, according to the rumor mill. Instead, they probably want to put the Dimensity 8100 MAX in the Pro model, which I think would be quite an unusual path. Typically, a Qualcomm processor is preferred to the MediaTek SoC (System on a Chip) in the western hemisphere.

Geekbench is supposed to provide the proof

At least that’s what an “alleged” Geekbench database entry published by “mysmartprice” is supposed to prove. However, without giving a link to the source. The search for the model number CPH 2357 was also unsuccessful, which is undoubtedly the internal designation of the Oppo Reno8 Pro. Either the entry is fake or it was removed from Geekbench. From this it is at least recognizable that it is not a Snapdragon 7 Gen 1. This processor has four ARM Cortex-A710 performance cores which clock up to 2.4 GHz and the four Cortex-A510 efficiency cores up to 1.8 GHz. However, Geekbench shows 2.85 and 2.0 GHz, which is the case for the Dimensity 8100 (MAX). 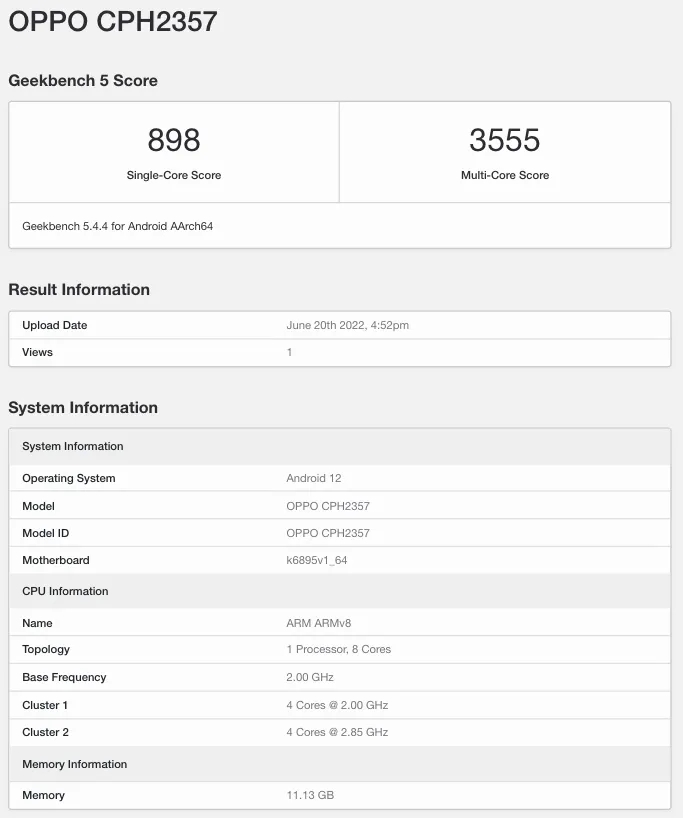 Main camera and MariSilicon X from the flagship

In the end it would be almost unimportant for us, because in my opinion the most important feature – is built into both Oppo Reno8 Pro models. We’re talking about the 50-megapixel main camera with the Sony IMX766 sensor (1/1.56 inch, 1.0 µm) from the Oppo Find X5 and X5 Pro. Even the in-house “MariSilicon X” NPU (Neural Processing Unit) is installed in both models. A flagship camera would have arrived in the middle class.

Oppo Find X5 in the test: Is expensive always better?